THE FUTURE IS RAIL

THE FUTURE IS RAIL

Movement is precious. The freedom we depend on to go to work, travel or buy our favourite products is nothing without movement, something we’ve all become acutely aware of in the past year. Demand for transport is growing, but so are its effects on our environment and the climate. The way Europe moves needs to change. With rail, it’s possible! With rail, Europe can move more, move freely, stimulate economic activity and still meet pressing climate objectives. Transport can become smarter, more connected and cleaner. That’s why our aim by 2030 is to double the amount of rail passengers and ensure that at least 30% of freight moves by rail. When it comes to the future of transport, the future is rail! 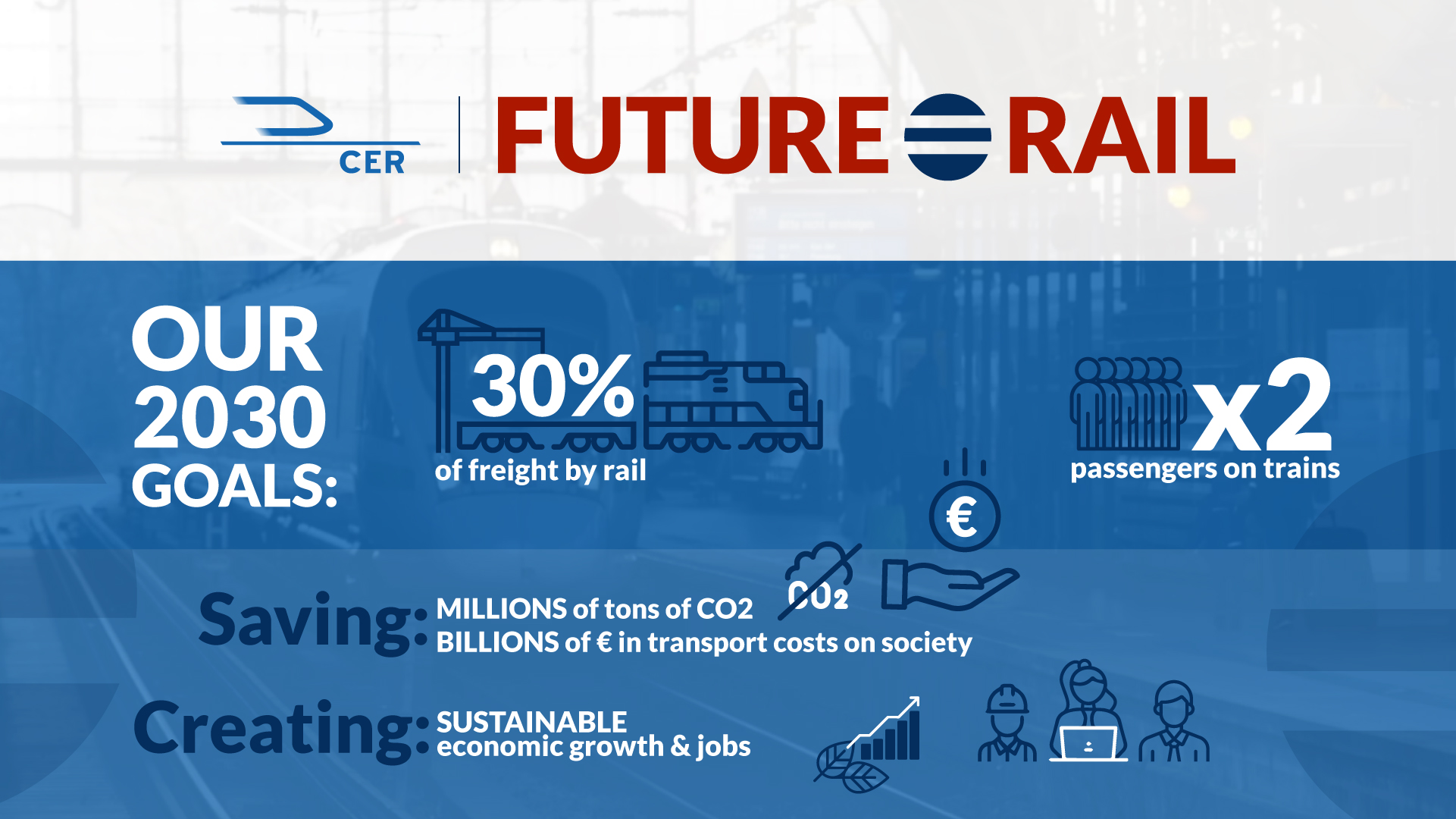 Digital solutions are helping to get more trains on tracks, enabling a greater shift to railways and improving existing services. A single system to manage all rail traffic in Europe (ERTMS) will help make the best use of rail capacity, which is increasingly managed digitally. Technologies such as predictive maintenance will help ensure that track repairs can be planned in advance and with the least possible disruption to traffic. Railways are investing in these technologies alongside network upgrades that are increasing punctuality and paving the way for longer trains. Overall total infrastructure expenditure increased by 58% over 5 years in the past decade.

Autonomous train operation and digital freight trains will also make the shift to rail more achievable and more attractive for customers. Key enabling technologies such as digital automatic coupling are already being invested in for simpler, safer, more efficient rail freight operations. This is important when you consider that our goal of transporting 30% of freight by rail by 2030 would lower transport’s cost to society by € 100 billion: that’s 290 million tons of saved CO2, 40,000 less premature deaths due to avoided pollution, and 5,000 less fatalities due to saved truck accidents. For passengers, it’s about offering convenience, comfort and reliability for an exceptional travel experience in both national and international services, accessible to all passengers. Rail companies continue to invest in digital technologies for a better on-board experience and to make it easier to buy tickets. They are also working with distributors on commercial agreements to facilitate pan-European integrated ticketing. 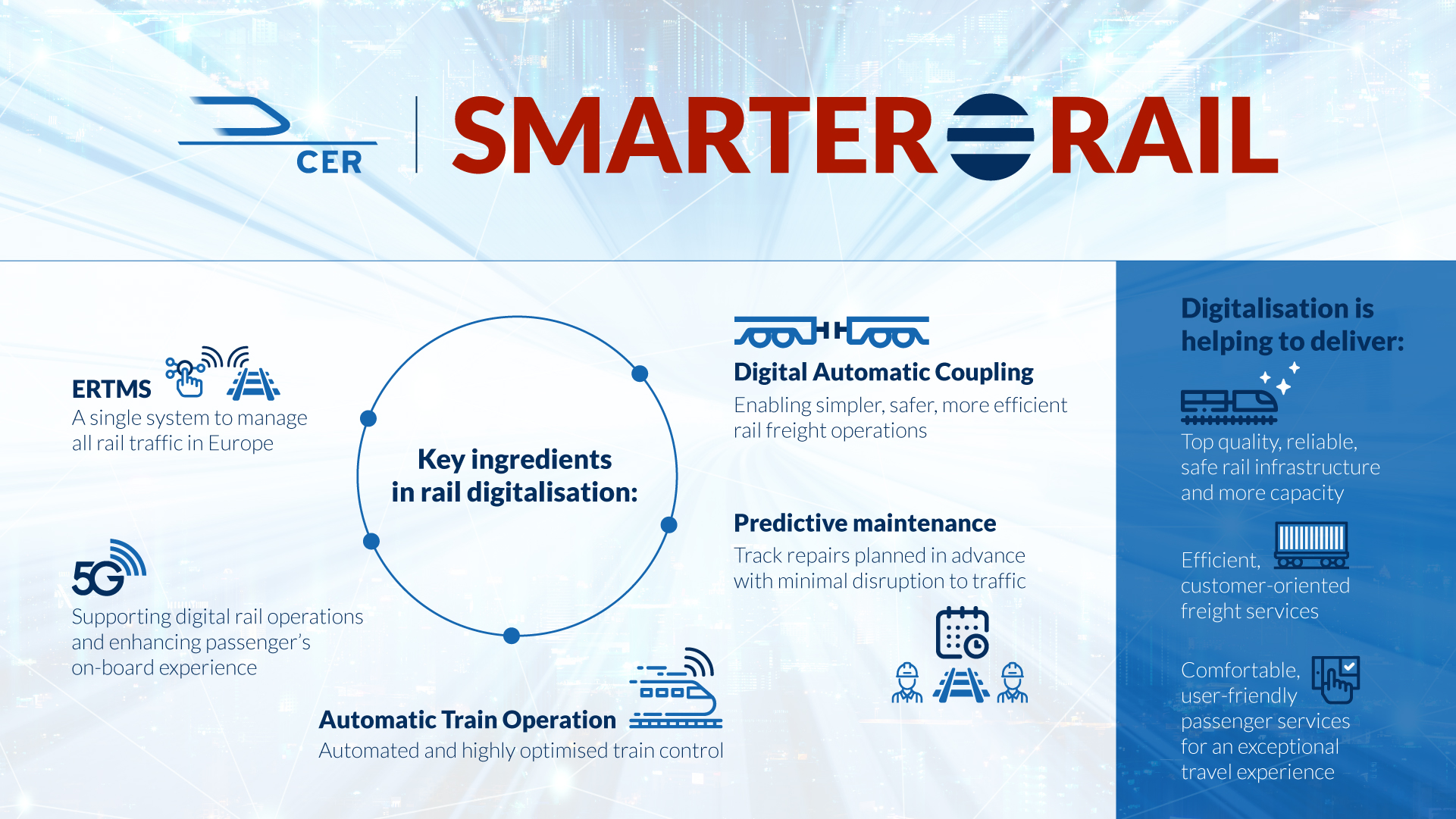 When it comes to clean transport, railways are way ahead of the game and full decarbonisation of rail is already within reach.

Rail pollutes 8x less and emits 9x less CO2. With four out of five trains already running on electricity, and plans to phase out the remaining diesel trains by 2050 thanks to alternative fuels, the total decarbonisation of rail transport is within reach. Even now it accounts for just 0.4% of greenhouse gas emission from transport in Europe, while carrying 18% of freight 8% of passengers. Increasing the amount of goods and people travelling by rail will help the EU reach its climate goals outlined in the EU Green Deal, including net zero emissions in the wider EU economy by 2050.

Rail freight in particular offers a green solution to accommodate increased freight activity in Europe, which is projected to grow by 30% in the next ten years. Every additional freight train on our tracks means 40 less trucks on our already congested roads and with 30% of all freight on rail we could save 290 million tonnes of CO2.

A modal shift to rail will also save energy. Rail is 7x more energy efficient than road transport. It accounts for just 2% of EU transport energy consumption and a third of the energy consumed by EU rail comes from renewable energy sources. This already surpasses the 2030 renewable energy target for transport, which contributed to the sector reducing its emissions from rail traction by 37% from 2005 to 2018.

All this makes rail a ready-made solution for decarbonised mass transport and logistics, giving travellers and businesses a climate-conscious transport choice. 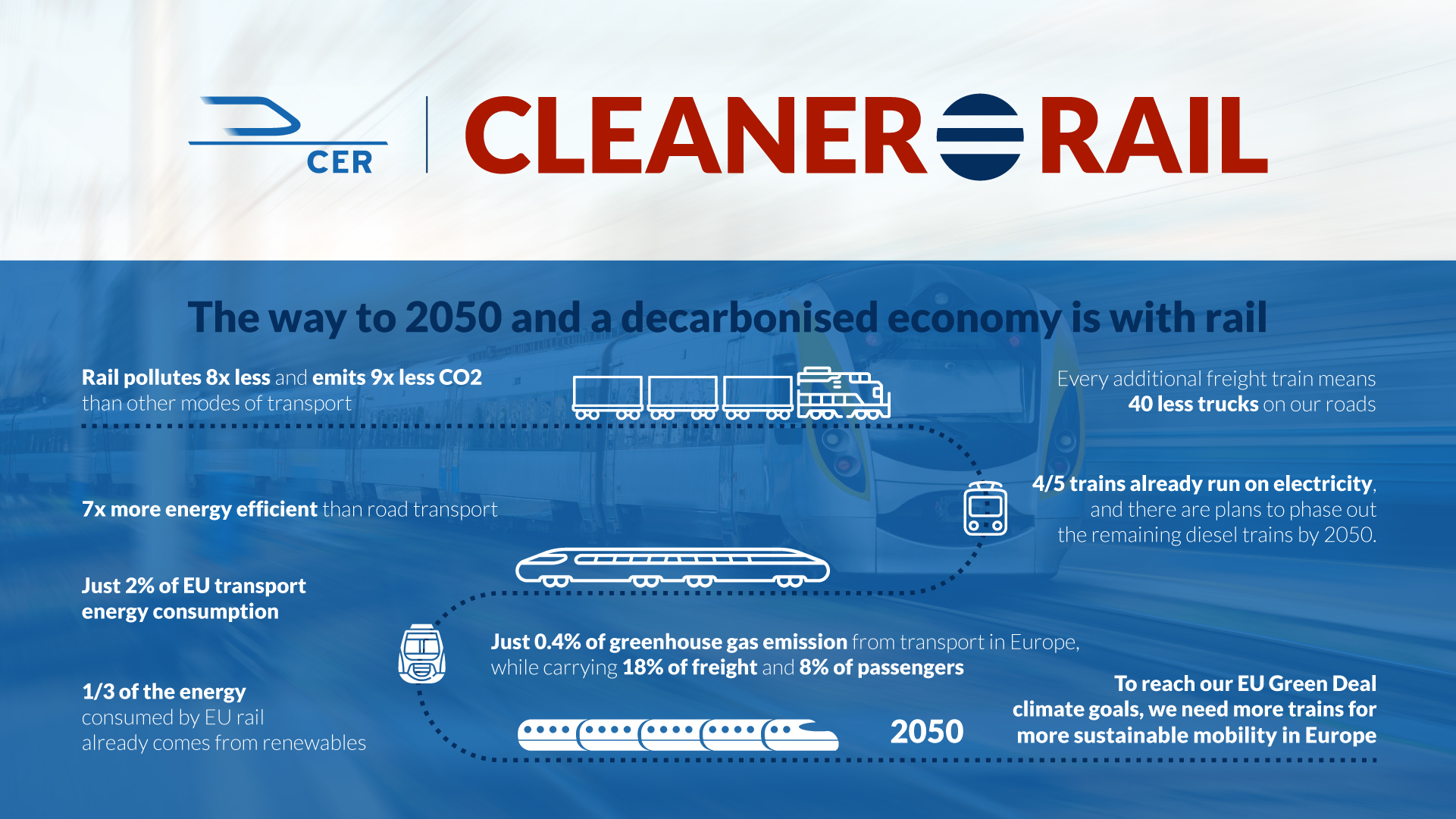 The rail network of tomorrow is being built today, transporting Europe’s citizens – from students to business travellers, commuters to tourists – and all manner of goods across regions, countries and the entire continent. Cooperation among rail actors is already leading to a more seamless rail network. Key cooperation areas include alignment on timetabling processes, ensuring train drivers can overcome language barriers, and simplification of national rules and EU-level technical requirements for trains to operate across borders.

New infrastructure capacity is being created, in particular to connect industrial sites to the main network for freight and to complete a European high-speed network connecting capitals and major cities. With the appropriate political support, high-speed trains and night trains between our cities can become a real alternative to cheap flights, providing travellers with more choice. As seen with well-loved formulas like the Interrail pass, such rail connections between countries also help forge a European identity and shape common values. At a more local level, railways are enablers of multimodal mobility services and want to play a bigger role in door-to-door mobility chains.

At the same time rail freight companies are also working towards more seamless multimodal transport and offering new types of service geared towards flexibility, efficiency and the specific needs of shippers. 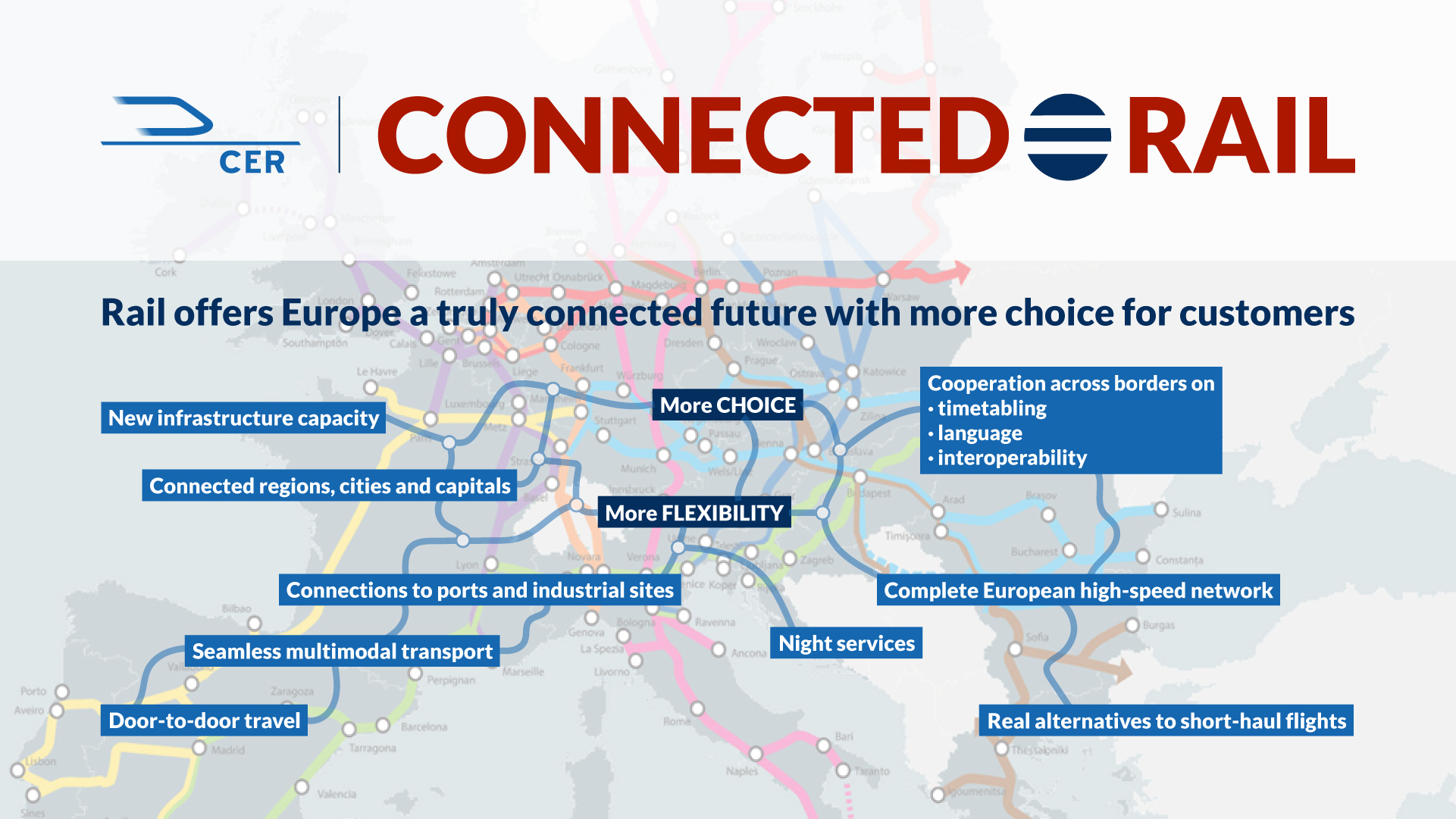 Railways are working hard to become the backbone of the smart, clean, connected transport of the future. However the sector needs the right support from policymakers to benefit from a favourable regulatory environment and attract the required investments to succeed.

Find out more about what’s needed to create the right conditions for rail to best serve EU transport ambitions: